New Construction UP & Unemployment DOWN

US builders spent slightly more in September; second straight monthly increase
WASHINGTON -- U.S. builders spent slightly more in September on home construction, partially offsetting losses in public schools, roads and government offices. Construction spending rose 0.2 percent in September from August to a seasonally adjusted annual rate of $787.2 billion, the Commerce Department said Tuesday. It was the second straight monthly increase. Still, spending is barely half the $1.5 trillion that economists consider healthy. Through first nine months of the year, spending is at $580.9 billion, about 3.5 percent below the same period in 2010. Analysts say it could be four years ...

National Unemployment Rate Falls to 9.0%
The nation’s unemployment rate slipped to 9.0 percent in October, as employers added 80,000 new jobs to their payrolls, according to data released Friday by the U.S. Department of Labor. Officials called the rate “little changed,” down from 9.1 percent the month before. The unemployment rate has remained in a narrow range from 9.0 to …

For Comparison: Sales in the cities west of highway 880 are becoming stronger. 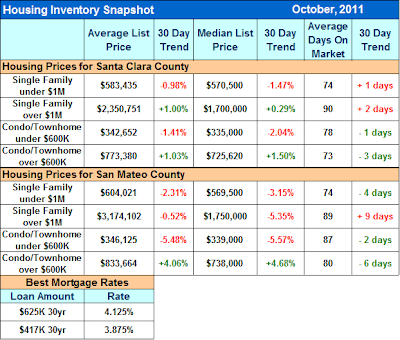