Where is Local Housing Headed?

Home values drop in S.F., other big metro areas
Real estate values in much of the Bay Area are continuing to fall, according to a report released Tuesday. Home values in the San Francisco-Oakland-Fremont metro area -- which includes San Francisco, Alameda, Contra Costa, Marin …

Mortgage Rates Edge Up Slightly After Positive Employment Report
Interest rates on home loans inched up only slightly this week after Friday’s positive employment report, which showed the economy added more jobs than economists were expected and the national unemployment rate dropped to 8.8 percent. According to the weekly mortgage rate survey released by Freddie Mac Thursday, the average rate for a 30-year fixed mortgage edged up to…

For Comparison: For the third month in a row we have seen steady activity in the cities west of highway 880. This could be an indication of a strong summer selling session, although we won’t know for another month. 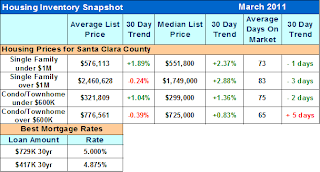 * Mortgage rates were collected from publicly available sources (yahoo.com) on the date stated. The accuracy of the information and the availability of these rates are not guaranteed by the publisher. Rates are provided for informational purposes only and are subject to change without notice. Actual market interest rates may vary.

Posted by Nathan Nahouraii at 4:38 PM