New study predicts 'double-dip' in housing market
While a national real-estate report released Tuesday predicts a "double dip" in the housing market, some local observers say Silicon Valley and San Mateo County will probably fare better than most regions covered in the index because of the relatively healthy high-tech economy. "There is no good news in October's report," said David Blitzer, chairman of the committee that released the Standard & Poor's/Case-Shiller home-price index. Citing expired tax credits for homebuyers and a lackluster national economy among the causes, Blitzer said "on a year-over-year basis, sales are down more than 25…

Fed issues gloomy economic forecast for 2011
Federal Reserve officials have become more pessimistic in their economic outlook through next year and have lowered their forecast for growth. The economy will grow only 2.4 to 2.5 percent this year, Fed officials said Tuesday in an updated forecast. That's down sharply…

Market Recap
The chart below shows that cities east of highway 880 are experiencing higher than normal demand for the season.

For Comparison: Sales picked way up on the west side of Highway 880. This could be an indicator of prices shooting up. 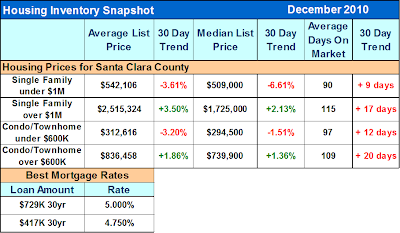 The table represents aggregated values based on MLS data for the specified date.
* Mortgage rates were collected from publicly available sources (yahoo.com) on the date stated. The accuracy of the information and the availability of these rates are not guaranteed by the publisher. Rates are provided for informational purposes only and are subject to change without notice. Actual market interest rates may vary.
Posted by Nathan Nahouraii at 4:45 PM